← UNITED4IRAN:Campaigns by Fellow Human Rights Activists
Protest the Executions of Mohammad & Abdollah Fathi! No Peace for the Islamic Republic of Murderers! → 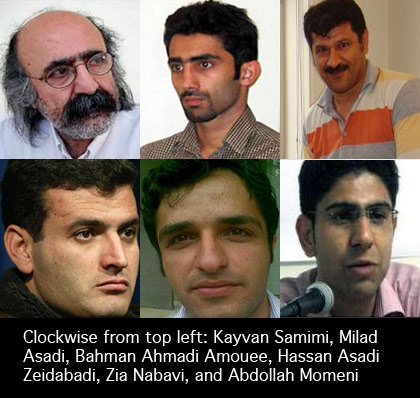 (16 May 2011) The International Campaign for Human Rights in Iran endorsed the call, by prominent prisoners of conscience, for an investigation into torture and mass due process violations and infringements on protections in Iran’s Citizen’s Bill of Rights following the 2009 presidential election. The Campaign called on the Central Committee charged with implementing the Citizen’s Bill of Rights to conduct a full and independent investigation into all allegations of abuse, and overturn convictions of political prisoners based on tainted evidence.

On 11 May 2011, twenty-six prominent Iranian prisoners of conscience, including journalist Bahman Ahmadi Amouee, student activist Zia Nabavi, and human rights defender Hassan Asadi Zeidabadi, wrote a letter to the head of the Central Committee charged with implementing the Citizen’s Bill of Rights.

The law, which came into effect in 2005, sets due process standards for the treatment of suspects in Iran. The letter, which appeared in the opposition online website Kalame, outlined the systematic violation of Bill of Rights protections by Iran’s Judiciary and Intelligence Ministry since the 2009 presidential election, and called on the Central Committee to launch an independent investigation into these violations.

“These prisoners can speak from experience; all have had their rights violated by interrogators and judicial officials,” said Aaron Rhodes, a spokesperson for the Campaign. “Signing this letter is a courageous act,” Rhodes continued. “Given these prisoners are still in detention, they could be subjected to more mistreatment by the same authorities whose actions have been questioned in the letter.”

In the 11 May letter, the prisoners alleged that authorities routinely violated all rights protected by articles 1 through 14 of the Citizen’s Bill of Rights. The prisoners reported that judicial and intelligences authorities arrested suspects without proper warrants and subjected them to torture and degrading treatment. Authorities allegedly used illegal forms of interrogation, including torture, and violated the suspects’ familial privacy by releasing personal photos, documents and other effects. The prisoners also wrote that judicial officials denied them adequate legal representation and an impartial trial.

Article 15 of the Citizen’s Bill of Rights specifically requires that the Central Committee investigate any violation of the law.

“Whether it is arrests without proper warrants, torture, or trials without legal representation, the Iranian Judiciary has a responsibility to investigate and punish violations of the rights enshrined in Iranian and international law,” Rhodes added.

Despite ongoing accusations of abuse, Iranian officials, such as Mohammad Javad-Larijani, head of Iran’s High Council on Human Rights, continue to deny that the government engages in torture, and have not made credible investigations into allegations.

Moreover, authorities continue to assert that all prosecutions are conducted according to the law and due process standards. Since 2005, however, Iran has obstructed international human rights monitoring and investigation into these violations by refusing to cooperate with Special Rapporteurs under the auspices of the United Nations Office of the High Commissioner of Human Rights. Specifically, the government has failed to allow visits from the Special Rapporteur on torture; Special Rapporteur on the independence of judges and lawyers; Special Rapporteur on extrajudicial, summary, and arbitrary executions; and the Working Group on enforced and involuntary disappearances.

Amongst the abuses alleged by the twenty-six prisoners in the letter is the routine violation of article 3 of the Citizens’ Bill of Rights, which guarantees defendants the right to a lawyer and legal defense. They said that “almost all of the signatories to this grievance were completely deprived of the right to choose and access a lawyer during their arrests and interrogations … and were not even allowed to have access to the country’s law books or … paper and pencil for preparing [a defense].”

The prisoners also alleged that they faced physical and psychological torture in violation of article 4 of the Citizen’s Bill of Rights, which requires detention and interrogation practices meet Islamic and ethical standards, and article 8, which prohibits torture and coercion and makes evidence based on coercion inadmissible in court.

“One of the most common forms of torture was keeping us in very small solitary cells (2.2 x 1.6 meters or 6.6×4.8 ft). This method is considered torture by all high-ranking officials of the country and interrogators and wardens also confirm that, after several weeks of detention in a solitary cell, the suspect will suffer severe physical and psychological disorders.”

“These allegations should be taken seriously, their perpetrators brought to justice, and unfairly imprisoned prisoners of conscience released,” said Rhodes.

Calling for an investigation, the prisoners wrote, “we demand the assertive, transparent, and fair pursuit of these grievances. [We add] that if, as prescribed by the law, a special investigatory commission is assigned to examine [these grievances]… they can collect a wider range of information about the systematic crimes and violations that have taken place after the election.”

← UNITED4IRAN:Campaigns by Fellow Human Rights Activists
Protest the Executions of Mohammad & Abdollah Fathi! No Peace for the Islamic Republic of Murderers! →