This is a short guide for collecting of human rights violations–how to spot violations, how to collect evidence, and what to do with the collected evidence. This guide is for practitioners and non-practitioners.

This is a short guide for collecting of human rights violations–how to spot violations, how to collect evidence, and what to do with the collected evidence. This guide is for practitioners and non-practitioners.

The principles outlined in this guide are applicable world-wide. However, this guide is mainly for use by Iranians in Iran. It enables every Iranian to participate in the collection and preservation of evidence of human rights violations by the Iranian authorities.

END_OF_DOCUMENT_TOKEN_TO_BE_REPLACED

Fundamentals of Freedom of Movement in Iran

Introduction to Freedom of Movement Violations in Iran:

Freedom of Movement is an important human right. The freedom to move within a state and the freedom to leave a state provides individuals with the ability to freely choose their place of residence, and to freely move from one place to another. Freedom of movement often serves as a last resort of protection for those suffering persecution. This right is set forth in article 12 of the International Covenant on Civil and Political Rights (ICCPR), which states that:

1. Everyone lawfully within the territory of a State shall, within that territory, have the right to liberty of movement and freedom to choose his residence.

2. Everyone shall be free to leave any country, including his own.

3. The above-mentioned rights shall not be subject to any restrictions except those which are provided by law, are necessary to protect national security, public order (ordre public), public health or morals or the rights and freedoms of others, and are consistent with the other rights recognized in the present Covenant.

4. No one shall be arbitrarily deprived of the right to enter his own country.

END_OF_DOCUMENT_TOKEN_TO_BE_REPLACED

Kommentare deaktiviert für Fundamentals of Freedom of Movement in Iran 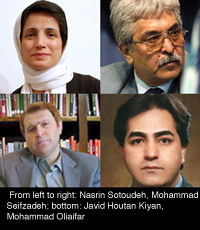 (24 August 2011) The Iranian Central Bar Association should come to the aid of embattled lawyers subjected to harassment, unfounded criminal charges, or prison sentences for defending prisoners of conscience and advocating for human rights, the International Campaign for Human Rights in Iran said today. END_OF_DOCUMENT_TOKEN_TO_BE_REPLACED

END_OF_DOCUMENT_TOKEN_TO_BE_REPLACED

AP: „Iran has allowed a top U.N. atomic inspector access to a site where it is developing advanced centrifuges that can be used to make nuclear fuel and to arm warheads, diplomats told The Associated Press on Tuesday. The diplomats said that Deputy Director General Herman Nackaerts of the International Atomic Energy Agency also was allowed to tour Iran’s heavy water production plant for the first time. Heavy water reactors – like the research unit being built by Iran – produce plutonium which, along with enriched uranium, can be used for the fissile core of nuclear warheads. A senior diplomat familiar with the visit described the Iranian move as significant in demonstrating openness after years of stonewalling IAEA requests for greater access to restricted nuclear activities. Iran is under four sets of U.N. Security Council sanctions because it refuses to suspend both enrichment and its heavy water reactor program. Therefore any sign that it is ready to open a larger window is likely to blunt U.S.-led efforts to increase pressure on the Islamic Republic for defying the Security Council… Before Nackaerts‘ five-day visit, which ended Saturday, the IAEA was forced to rely on satellite imagery in concluding that the heavy water production plant was in operation. One of the diplomats said Nackaerts was able to confirm this on his visit.“ http://t.uani.com/qEarlb

END_OF_DOCUMENT_TOKEN_TO_BE_REPLACED

On Monday August 23, blogger and human rights activist Hossein Ronaghi Maleki, was once again taken to a hospital outside of Evin prison.

Despite recommendations by the physicians for Hossein’s need to be hospitalized and treated outside of prison, he was taken back to Evin after a short series of tests were performed.

Ahmad Ronaghi, Hossein’s father told Jaras news site, „Today, Hossein was taken to Hasheminejad hospital for a series of tests and CT scan, but he then was returned to prison. O judicial authorities, hear my voice, my son is seriously ill and needs to be under physicians care, he will lose his life in prison.

END_OF_DOCUMENT_TOKEN_TO_BE_REPLACED

1225 GMT: Kalemeh claims that up to 35% of Qom dairy producers are on the verge of bankruptcy because of unpaid support funds to cover the effect of subsidy cuts. The site that workers have been unpaid for 11 months.

1215 GMT: Reformist Watch. Prominent reformist Mostafa Tajzadeh, communicating from prison, has distanced himself both from March’s Parliamentary votes and from any deal with „moderate hardliners“. Tajzadeh said „Free elections yes, show elections never,“ and said the project of „greenhouse (false) leftists“ linked to the new Islamic Constancy Front has failed.

1210 GMT: Deviant Current Watch. The hardline website Borhan has attacked the Ahmadinejad camp, claiming that „deviation of economic struggle, weakening people’s beliefs, and inciting them to political unrest“ are cases of Government corruption.

1200 GMT: Justice Watch. Prominent attorney Mohammad Seifzadeh has written former President Mohammad Khatami to ask for the reformation of the judiciary in Iran. Claiming that the existing system violates legal rights, Seifzadeh called for the dissolution of Revolutionary and clerical courts.

Seifzadeh, a co-founder of the Center for Defenders of Human Rights, was sentenced in October 2010 to nine years in prison and banned from legal practice for 10 years.

1110 GMT: Assurance of the Day. Ayatollah Makarem Shirazi, commenting on the situation in Somalia, „Nobody perishes of hunger in Iran.“

1020 GMT: Justice Watch. The Guardian picks up on the story — reported in EA yesterday — of the„confession“ of 26-year-old Majid Jamali-Fashi at his trial for the murder of physicist and university professor Masoud Alimohammadi.

The article adds the details, from Fars, that Jamali-Fashi said he was assigned to carry out five other „terrorist operations“ after the assassination of Alimohammadi, reportedly connected to Iran’s nuclear programme. The site also says Alimohammadi’s family asked for the death penalty for the Jamali-Fashi.

Reuters‘ report on the case:

0720 GMT: Justice Watch. Kalemeh reports that security forces raided a meeting at an iftar — the breaking of the Ramadan fast — at the home of activist Fakhrosaadat Mohtashamipour, claiming that even a private gathering needs a permit.

Mohtashamipour, the wife of leading reformist Mostafa Tajazadeh, was detained during a demonstration in March.

0645 GMT: In the Skies. Peyke Iran claims that President Ahmadinejad has ordered the cut-off of fuelin Iran to aircraft of the Dutch carrier KLM.

The European operations of Iran’s national airline Iran Air have been hindered since last year by block on re-fuelling amidst international sanctions. Tehran has declared that it will take similar measures against European airlines.

What is interesting is the spin that Bayat and Press TV put on the related matter of oil and gasoline production. The managing director offered the reassurance that „the country’s petrochemical plants have stopped gasoline production“, having been converted last year to supplement the domestic supply, but he then added that „the production of the material to increase the octane number of the gasoline is not halted“.

Press TV steps in at this point to reassure, „When the US sanctions stopped many companies from selling gasoline to the Islamic Republic in 2010, some petrochemical plants of the country started producing gasoline to increase the Iran’s total production by 40%. The measure helped Iran to meet domestic demand and start exporting the product.“

All good then, until we noticed this statement by Nasser Soudani, the Deputy Chairman of Parliament’s Energy Commission: Iran is to „temporarily“ import petrol to meet its daily consumption needs and compensate for the poor quality of its domestically produced fuel.

The MP, speaking to Mehr, gave substance to Bayat’s cryptic comment on „increasing the octane number“: „The domestically produced petrol due to its low octane [rating] lacks a desirable quality and has to be mixed“ with imported fuel with a better quality.

Soudani blamed a decreased in output on a 23 May at the southern Abadan refinery during a visit by President Mahmoud Ahmadinejad.

He insisted that the import would „definitely be temporarily“ and likely to come to an end by the end of the Iranian year next March.

All of this comes almost a year after Minister of Oil Masoud Mirkazemi announced self-sufficiency in gasoline with daily production of 66.5 million litres

Kommentare deaktiviert für The Latest from Iran (24 August): Oil and Gasoline — It’s All the Way You Look at It….

Senegal’s Abdoulaye Wade and Mahmoud AhmadinejadI was asked by World Politics Review to post some introductory thoughts on Iran’s political and economic manoeuvres with African states. WPR, which operates a subscription service, has given us permission to re-print the article — readers can also get a free trialof the material on the site.

END_OF_DOCUMENT_TOKEN_TO_BE_REPLACED

Iran News Round Up (August 23)