THE UNIVERSITY TIMES: The Price of Life

Last Monday was ‘World Day against the Death Penalty’ and whilst many Trinity students were enjoying the eccentric spectacle of Bollywood filmmaking in Front Square, some human rights activists were attending an altogether quite different event. DU Amnesty, Scholars at Risk and Trinity Equality Fund had the pleasure of welcoming Mohammad Mostafaei, an Iranian human rights lawyer, to the Davis Theatre to give a talk entitled ‘No to Execution: A Mediation on Five Tragic Situations’. Mohammad was forced to flee his native Iran last year after working as a defence lawyer for Sakineh Mohammadi Ashtiani who was sentenced to death by stoning for adultery convictions. According to a recent article in The Guradian her death sentence is “on hold”. Mohammad himself, his wife and brother-in-law were imprisoned by Iranian authorities. Now based in Norway with his family, Mohammad was released after international pressure mounted on the authorities. He has been sponsored by Amnesty International and Trinity Equality Fund to tour Ireland promoting the anti-death penalty cause. END_OF_DOCUMENT_TOKEN_TO_BE_REPLACED

Kommentare deaktiviert für THE UNIVERSITY TIMES: The Price of Life

Iran for Beginners: So What is This $2.8 Billion Bank Fraud?

Former Bank Melli Head Mahmoud Reza KhavariKevan Harris, writing for The Iran Primer of the US Institute of Peace, sets out the massive bank fraud engulfing Iranian finance and politics:

What’s the origin of the Islamic Republic’s biggest banking scandal?

Kommentare deaktiviert für Iran for Beginners: So What is This $2.8 Billion Bank Fraud?

The Latest from Iran (18 October): The Same Old Mahmoud

1858 GMT: Currency Watch. Despite the Central Bank’s promises to strengthen the value of the Iranian currency, the rial is still 1250 to $1 on the free market, as opposed to an official rate of 1056:1. END_OF_DOCUMENT_TOKEN_TO_BE_REPLACED 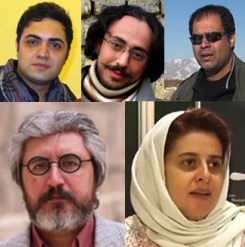 A month after the arrest of five independent Iranian filmmakers on charges of working for BBC Persian, 21 Iranian filmmakers and actors living outside of the country signed a statement asking the international community to boycott official Iranian film and television organizations and impose sanctions on Iranian media officials. END_OF_DOCUMENT_TOKEN_TO_BE_REPLACED

AFP: „Iran’s authoritarian regime has secretly executed hundreds of prisoners, according to a new UN report detailing growing rights abuses in the Islamic republic. The mysterious executions at Vakilabad prison in Mashhad in eastern Iran were highlighted in a report compiled by Ahmed Shaheed, the new UN special rapporteur on the human rights situation in Iran. Shaheed, who assumed responsibility for the mandate on August 1, billed this as an interim report cataloging the most recent trends in the human rights situation in Iran. The report, which is to be presented to the UN General Assembly on Wednesday, details a raft of abuses from the denial of women’s rights to torture, but the most shocking data was the skyrocketing rate of executions… ‚Furthermore, authorities reportedly conducted more than 300 secret executions at Vakilabad prison in 2010,‘ the report said. ‚Vakilabad officials, in violation of Iranian law, allegedly carried out the executions without the knowledge or presence of the inmates‘ lawyers or families and without prior notification to those executed,‘ it said. ‚It has also been reported that at least 146 secret executions have taken place to date in 2011.'“ http://t.uani.com/qIoIZP  END_OF_DOCUMENT_TOKEN_TO_BE_REPLACED