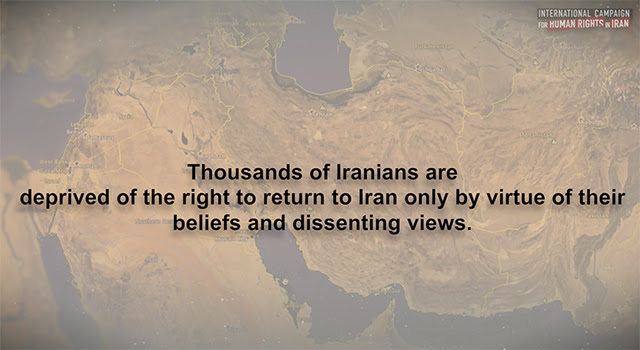 Rouhani’s Promise of Right of Return Proves Hollow for Many

April 23, 2015—The International Campaign for Human Rights in Iran released a video today highlighting the plight of the thousands of Iranians who wish to return to their homeland, yet fear likely imprisonment upon arrival for the peaceful expression of their beliefs, art, or lifestyle.

Dozens of Iranian expatriates who have traveled to Iran following assurances by President Hassan Rouhani regarding their safe passage, have been arrested, interrogated, prevented from leaving by having their passports confiscated, and, in many instances, imprisoned upon their return.

The video, Iranian Expats on the Right to Return (on YouTube and on Facebook), features commentary by four prominent Iranian artists and writers, including journalist Masih Alinejad, author Roozbeh Mirebrahimi, painter Nikzad Nojoomi and singer and songwriter Melody Safavi.

“Iranians should not fear returning home because of views or lifestyles that the government disagrees with,” said Hadi Ghaemi, Executive Director of the Campaign. “The administration beckons them, and then the Judiciary imprisons them; the Government of Iran needs to address this disconnect.”

As singer and songwriter Melody Safavi laments in the video, “I am creating art. Something that should normally be appreciated but, unfortunately, I am treated in the same way as a criminal.”

During his visit to the UN General Assembly in September 2013, and shortly following his election into office, President Rouhani told a jubilant crowd of Iranian-Americans at a reception at a New York City hotel that visiting their homeland was their “incontrovertible right.”

Some Iranian exiles, like journalist Seraj Mirdamadi, took Rouhani at his word.

Today, Mirdamadi is serving a six-year prison term in Evin prison on trumped up charges of “propaganda against the state” and “conspiracy against national security.”

Other returning expatriates have met a similar fate.

Most recently, Mostafa Azizi, an author and television producer who was a longtime resident of Canada, returned to Iran in January 2015, only to be arrested shortly thereafter on February 1 and placed into solitary confinement at Evin prison.

Following his inauguration, President Rouhani reportedly asked Iran’s Intelligence and Foreign Ministries to facilitate the return of Iranians living abroad. In November 2013, the Deputy Foreign Minister for Consular, Parliamentary and Iranian Expatriate Affairs announced the formation of a committee to help exiled political activists return to Iran. Yet if the arrests over the past year and a half are any indication, it seems the right of safe return—as interpreted by the Iranian authorities—only applies to those who do not express any dissent against the state.

As the Spokesperson for the Iranian Judiciary, Gholamhossein Mohseni Ejei, stated in 2013, “We do not ban people from entering the country or say they do not have the right to enter the country… but when they enter they will be charged and prosecuted.”

This is in violation of Article 13(2) of the United Nations’ Universal Declaration of Human Rights, which states, “Everyone has the right to leave any country, including his own, and to return to his country.”