Fom big budget soap operas and sitcoms to gameshow extravaganzas and variety shows, Ramadan in Iran means big business for TV. A variation on the true crime genre, Ghalbe Yakhi is based on actual crimes in the judiciary system’s records.

An official ban and a defeat by Argentina in the final moments didn’t stop Iranians from celebrating.

Iranians celebrate in the streets of Tehran following Iran’s loss to Argentina in the final minutes of the match on June 21. Notwithstanding the presence of plainclothes militia and riot police, the celebrations remained peaceful. Al Jazeera America

Iranians cheer out of their car in traffic following the match. Al Jazeera America

Iranians of all ages and both genders gather in the street after the match. Al Jazeera America

Despite the loss, Iranians were proud of their team’s performance during its second match. Al Jazeera America

Men and women in Tehran cheer at the conclusion of the match on June 21. Al Jazeera America

Iran may have lost to Argentina thanks to a Lionel Messi strike in the dying seconds of their World Cup match on Saturday, but that didn’t stop the Tehran street party that rattled the authorities. Large numbers of Iranians converged on the streets, dancing on overpasses, overrunning major thoroughfares, chanting and blaring music out of cars, in an outpouring of popular celebration that prompted the authorities to send plainclothes security agents on motorbikes through the crowds to disperse them. Riot police had locked down thoroughfares like Tehran’s busy Parkway intersection, but young people flooded into side streets to carry on their festivities, buoyed by the Iranian national soccer team’s strong showing against top-ranked Argentina.

Most neutral commentators concurred that the Iranian team had mounted a superb effort and had been unlucky to be denied at least a draw against the two-time World Cup champions. “This dignified loss means more to us than any win,” said one young man dancing with his friends on the street.

Despite the heavy police presence across the city, the unexpected outpouring for Team Melli — as the national soccer team is known — stayed strictly in the spirit of fun. Young peopled flew the Iranian flag from their motorbikes and chanted their thanks to individual players, but their commotion carried none of the political overtones of past public celebrations around the World Cup. Instead, most seemed content to have Team Melli project a new image of Iran to the world, that of a moderate, soccer-loving nation, progressive enough to have an endangered species, the Asian cheetah, on its team uniform. “The national team and their fans can both improve Iran’s reputation, and if the government cooperates and doesn’t crack down, that will boost people’s sense of hope,” said Ali, a 28-year-old event manager. “Iranians are more depressed today than any other time, so a little bit of happiness can make it better.”

It’s precisely that prospect of hopefulness, though, that some say led the Iranian regime to deliberately stanch public excitement in advance of the World Cup. Security authorities took the unprecedented step of banning the broadcast of matches in public cinemas and cafés, effectively barring Iranians from experiencing the matches as collective events.

In 2010 authorities had allowed crowds of men and women to watch the World Cup in cinemas across the country, just months after the country’s Green movement uprising. At that delicate time, some Iranian players wore green armbands on the field to show solidarity with protesters, and young people chanted political slogans in those packed cinemas in support of jailed opposition leaders.

But today, with the national mood one of malaise and little prospect of political unrest, the banning of public screenings seems to reflect Iranian hard-liners’ determination to undermine the government of President Hassan Rouhani. “The security forces are trying to disillusion the pro-Rouhani electorate,” said one political analyst who asked to remain anonymous because of his strong political connections inside Iran. “It makes it seem as though nothing has changed under him, that basic things like watching football are being rolled back.”

END_OF_DOCUMENT_TOKEN_TO_BE_REPLACED 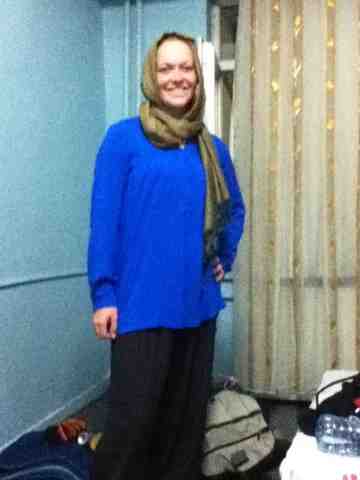 In many Iranian cities, supporters of various presidential candidates have taken to the streets to campaign for their favorite candidate. These photos show the people in Tehran on Wednesday engaged in the lively campaign.

Campaigning for the presidency and for City Council positions ended at 8 AM today, Thursday June 13, and candidates are no longer allowed to engage in any form of advertisement. According to elections laws, advertising must end 24 hours prior to the actual elections. The elections are set for Friday, June 14.

Eight men were approved by the Guardian Council to run for president, out of which two have dropped out of the race.

END_OF_DOCUMENT_TOKEN_TO_BE_REPLACED

Election Campaign In The Streets Of Tehran

In recent days, supporters of Iranian presidential candidates have been taking to the streets to campaign for their favorite candidate. Photographer Arash Khamooshi has captured the excitement in the capital city Tehran. Iran’s 2013 presidential election will be held June 14. Eight men were approved by the Guardian Council to run in the election, out of which two have dropped out of the race.

END_OF_DOCUMENT_TOKEN_TO_BE_REPLACED

Kommentare deaktiviert für Election Campaign In The Streets Of Tehran

END_OF_DOCUMENT_TOKEN_TO_BE_REPLACED

The historic Portuguese Fortresses of Hormuz island in Persian Gulf are suffering from neglec. The story seems to be the same for the whole island which according to ISNA is drowing!

Hormuz is an Iranian island in the Persian Gulf. It is located in the Strait of Hormuz and is part of theHormozgan Province. There is a historic Portuguese fortress on Hormoz Island, the Fort of Our Lady of the Conception. The Portuguese Fortresses were constructed in southern Iran after the Portuguese occupied the area. The island was then captured by a combined Anglo-Persian force in 1622 in the Capture of Ormuz (1622). END_OF_DOCUMENT_TOKEN_TO_BE_REPLACED