Mohammadi, who has a history of severe health problems, was transferred from Evin Prison to Taleghani hospital in Tehran on August 2, 2015, because of neurological paralysis. After eight hours of preliminary medical observations, they took her back to prison, even though the doctors insisted she needed to be seen by a specialist, according to Rahmani.

“Her most urgent and most important request is that she be put under the supervision of a specialist physician. That’s what we have asked and the Prosecutor has apparently agreed to it, but no action has been taken yet,” Mohammadi’s husband told the Campaign from his current residence in France.

Mohammadi, a member of the Defenders of Human Rights Center, now banned in Iran, wasarrested on May 5, 2015, ostensibly to continue serving a six-year prison sentence dating from a2011 that she had been unable to serve because of her severe illness. That 2011 ruling was based on charges of “assembly and collusion against national security,” “membership in the Defenders of Human Rights Center,” and “propaganda against the state.”

The prominent activist’s return to prison can only be explained as a reflection of the authorities’ displeasure with her continued human rights activism in Iran.

Rahmani said when Mohammadi was brought to prison from the hospital on Sunday, her sister visited her during visitor’s hour and noticed that she was slurring her words and had difficulty speaking, “which are clear signs of neurological paralysis.”

“Narges’ case is in the hands of the Intelligence Ministry and the Judiciary. They are fully aware of her illness. The medical examiner of Zanjan stated in 2012 that her illness becomes worse in closed, tense, conditions….Her illness will get worse and reach a dangerous stage if she is not put under the care of a medical specialist,” Rahmani said.

“The Judiciary is responsible for protecting her life. Narges’ sentence was not gradual death. Even though we disagree with her [six-year] sentence, it should be carried out under conditions that do not lead to her death,” he added. 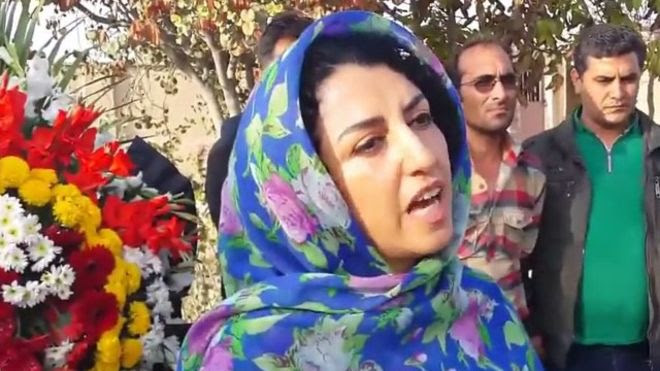 The Intelligence Ministry has made a written request to impose the maximum punishment on human rights activist Narges Mohammadi, her husband Taghi Rahmani told the International Campaign for Human Rights in Iran.

“Recently Ms. Mohammadi’s case file has included a letter from the Intelligence Ministry which recommends that the judge give her the maximum punishment. But this letter is against the law and undermines the independence of the Judiciary as well as the judge presiding over Branch 15 of the Revolutionary Court,” Rahmani stated.

The latest charges against Mohammadi, who is the spokesperson for the now-banned Defenders of Human Rights Center, include “assembly and collusion against national security,” “propaganda against the state,” and “membership in the Step by Step to Stop Death Penalty” group, which is regarded as an illegal and anti-state group.

Since her controversial meeting with the European Union’s foreign policy chief Catherine Ashton in Tehran in March 2014, Mohammadi has received ten summonses and warnings and has been questioned by security authorities several times.

Taghi Rahmani told the Campaign that his wife’s trial was due to start on July 5 but for unknown reasons she was not transferred from Evin Prison and did not appear. The judge postponed the trial but no new date has been announced. Mohammadi’s trial was originally set for May 3 but her lawyer had requested more time to prepare.

Mohammadi wrote a letter from prison addressed to Tehran’s chief prosecutor. In the letter, published in Kalame.com on July 6, Mohammadi criticized the authorities for not allowing her to speak to her children on the phone.

“Is it against the country’s judicial regulations to let a mother or father hear her or his child’s voice for a few minutes, a couple of times a week? If not, why is this unfair practice going on? Does a mother’s contact with her child threaten national security? Or do you just want to further punish women who criticize?” the letter asked.

Mohammadi’s family have been told that her latest detention on May 5 is to enforce the six-year prison sentence imposed on her in 2012. At the time she was held in Zanjan Prison, but because of serious medical issues she was released on 600 million tomans (US $200,000) bail.

Two hundred and fifty human rights and women’s rights activists and journalists signed a statement on May 6, demanding the release of Narges Mohammadi.

Mohammadi’s husband has asked Iran’s Minister of Intelligence to help launch an investigation into her case, as well as the cases of other individuals prosecuted in the aftermath of the disputed 2009 presidential election and who are still in prison, such as Abdolfattah Soltani and Mohammad Seifzadeh.