Iran: The real cost of sanctions

We look at the impact of increased sanctions against the Islamic Republic and ask who it really affects.

The United States has unveiled aggressive new sanctions targeting Iran’s currency and car industry that are among the toughest yet. They are aimed at making Iranian money all but unusable outside the country.

Sanctions now make it harder for the compromise we need in a couple of months time when you have a new Iranian president – so they represent an absence of diplomatic nuance within Washington.

The White House is increasing pressure on Tehran to stop it from developing nuclear weapons and „meet its international obligations“.

The latest measures mark the first time Iran’s currency, the rial, has been directly targeted by sanctions.

The sanctions apply to foreign financial institutions making what is described as significant transactions in the rial, and those holding significant amounts of the currency outside Iran. However, the meaning of ’significant‘ in this case, has not been made clear.

The sanctions also ban the sale of goods and services to Iran’s car industry, the second largest employer after the energy sector.

White House spokesman Jay Carney announced the measures: „The steps taken today are part of President Obama’s commitment to prevent Iran from acquiring a nuclear weapon, by raising the cost of Iran’s defiance of the international community. Even as we intensify our pressure on the Iranian government, we hold the door open to a diplomatic solution. However, Iran must understand that time is not unlimited.“

Tehran has always insisted its programme is for peaceful purposes – for generating power and medical devices; but the US claims Iran is working to develop nuclear weapons. END_OF_DOCUMENT_TOKEN_TO_BE_REPLACED

Bloomberg: South Korea Reduces Crude Imports From Iran by Half in April

Purchases last month were 507,821 metric tons, compared with 1.04 million tons a year earlier, according to data on the Korea Customs Service’s website today. The volume was 556,658 tons in March, the figures showed. The April deliveries were equivalent to about 124,000 barrels a day.

South Korea halted imports of Iranian crude in August and September after the start of a European Union ban on insurance coverage for tankers carrying oil from the Persian Gulf nation. The injunction was a part of sanctions by Western countries intended to pressure the Islamic republic to stop its nuclear program, which the U.S. and Israel say is aimed at developing atomic weapons and Iran says is for civilian purposes.

South Korea resumed crude shipments from Iran in October after the Persian Gulf nation offered its own vessels for transporting the commodity. 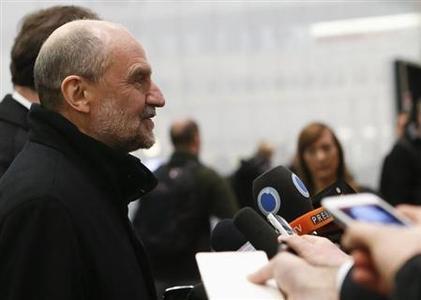 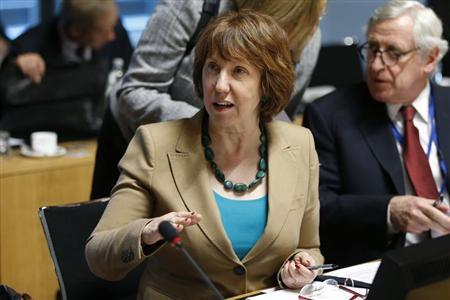 1 of 2. Herman Nackaerts, head of a delegation of the International Atomic Energy Agency (IAEA), speaks to journalists at the airport in Vienna after arriving from Iran January 18, 2013.

By Fredrik Dahl and Parisa Hafezi

(Reuters) – Iran faces international pressure over its nuclear program in two separate meetings on Wednesday, but no breakthrough is expected with the Islamic state focused on next month’s presidential election.

In Vienna, the U.N. nuclear agency will once again urge Iran to stop stonewalling its inquiry into suspected atomic bomb research by Tehran, which denies any intent to make such arms.

The talks started around 10 a.m. (4 a.m. EDT) at Iran’s diplomatic mission in the Austrian capital.

Later over dinner in Istanbul, the European Union’s top diplomat will meet Iran’s chief nuclear negotiator – also now a presidential candidate – to discuss a broader diplomatic effort bid to resolve a row that could ignite war in the Middle East.

The two sets of talks represent distinct diplomatic tracks but are linked because both center on suspicions that Iran may be seeking the capability to assemble nuclear bombs behind the facade of a declared civilian atomic energy program.

Any movement in the decade-old standoff will probably have to wait until after Iranians vote on June 14 for a successor to President Mahmoud Ahmadinejad, analysts and diplomats say.

Even though it is Supreme Leader Ayatollah Ali Khamenei who decides Iran’s nuclear policy, the conservative leadership may want to tread cautiously ahead of a poll in which loyalists will be challenged by two major independents.

With the election coming up, „the Iranians will do everything to keep everything stable,“ one Western envoy said.

Tehran says its nuclear activity has only peaceful purposes and that it is Israel, widely believed to be the Middle East’s only nuclear-armed power, that threatens peace and stability.

The IAEA has been trying for more than a year to coax Iran into letting it resume an inquiry into what the U.N. watchdog calls the „possible military dimensions“ of its nuclear work.

Wednesday’s talks in Vienna will be the 10th round of negotiations between the two sides since early 2012, so far without a framework agreement that would give the IAEA the access it wants to sites, officials and documents.