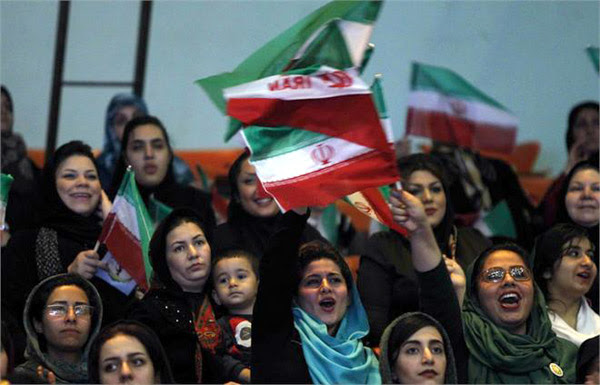 In a letter addressed to the Fédération Internationale de Football Association (FIFA), the Swiss-based organization responsible for administering the World Cup soccer competitions, 190 Iranian activists have asked FIFA to suspend Iran’s membership in FIFA, in response to the Iranian government’s ban on the presence of Iranian women in soccer stadiums.

The letter, addressed to FIFA chief, Sepp Blatter, and signed by prominent Iranian activists such as Nasrin Sotoudeh, Parastou Forouhar, Mohammad Maleki, and Nobel laureate Shirin Ebadi, states that “The Islamic Republic of Iran’s refusal to allow Iranian women into stadiums to watch soccer matches, a practice started in 1982, has moved us to seek your assistance as the highest official of FIFA, towards removal of this unfair ban.”

The signatories to the letter wrote, “We ask FIFA to suspend the membership of the Islamic Republic of Iran based on Article 3 of its Articles of Association, or at least, to follow the commended 2014 action of the Federation Internationale de Volleyball (FIVB) to ban Iran from hosting any competitions, and to prevent the Islamic Republic of Iran from holding any FIFA-organized sports events in Iran.”

“The Islamic Republic of Iran’s policy to deprive women from attending soccer games is known to the world. No one should be banned from attending soccer or volleyball games in sports stadiums based on gender. No one should be detained on the charge of wanting to watch a soccer or a volleyball game at a stadium, or be beaten for it,” added the activists in the letter.

This reference in the letter was to the imprisonment of Ghoncheh Ghavami in June 2014 for five months, much of this time in solitary confinement, after she attempted to enter a Tehran sports stadium to attend a match, until she was released on bail on November 22, 2014, and to the physical assault and arrests of women by security guards on June 20, 2014 after they had tried to enter the stadium to watch the World League volleyball match between Iran and Italy.

“Employing such policies against women is morally wrong, discriminatory, and against the spirit and Articles of Association of FIFA, and is not consistent with the spirit of the laws governing Switzerland and international laws. FIFA has a duty to oppose all types of discrimination and bias, including banning women from watching soccer matches in stadiums,” stated the letter.

Referring to the UN Convention on the Elimination of All Forms of Discrimination against Women, approved in 1997, the signatories added, “Any type of deprivation of fundamental rights or restricting such rights based on gender, aimed to or resulting in reduced access of women to sports” is prohibited.

Iran jails British-Iranian woman who was detained for watching volleyball

A British-Iranian woman who was arrested in Iran after trying to attend a volleyball match has been sentenced to one year in jail, local media says, quoting her lawyer.

Ghoncheh Ghavami, a law graduate from London, was arrested in June at a Tehran stadium, where Iran’s national volleyball team was to play Italy.

„According to the verdict she was sentenced to one year,“ her lawyer Alizadeh Tabatabaie was quoted in Iranian media as saying on Sunday.

He said the judge had shown him the sentence, but no reason was given for the conviction.

Iranian officials have said Ghavami was detained for security reasons unrelated to the volleyball match.

Britain said on Sunday it was worried about the case and the way Ghavami had been treated.

„We are concerned about reports that Ghoncheh Ghavami has been sentenced to 12 months in prison for ‚propaganda against the state‘,“ the foreign office said in a statement.

„We have concerns about the grounds for this prosecution, due process during the trial and Ms Ghavami’s treatment whilst in custody.“

The „Free Ghoncheh Ghavami“ Facebook page, where her friends and family campaigned for her release, features photographs of her set against the slogan: „Jailed for wanting to watch a volleyball match.“

An update on the page on Sunday appeared to corroborate the one-year sentence but bemoaned the closed-door legal process that has prevailed in the case.

„This morning Ghoncheh’s family and lawyer returned empty handed from branch 26 of revolutionary court,“ it said.

„It is not clear to her family and lawyer as to what the current legal basis of her detention is. A fair and just legal process according to Iran’s legal framework is the basic right of every Iranian citizen. Why are these rights not upheld in Ghoncheh’s case?“

Ghavami’s arrest came after female fans and women journalists were told they would not be allowed to attend the volleyball match at Azadi stadium in the capital.

National police chief General Esmail Ahmadi Moghaddam said it was „not yet in the public interest“ for men and women to attend such events together.

Women are also banned from attending football matches in Iran, with officials saying this is to protect them from lewd behaviour among male fans.