END_OF_DOCUMENT_TOKEN_TO_BE_REPLACED

Sixteen More Prisoners Executed Secretly in Mashad on 23 & 24 May

Reliable sources have told the International Campaign for Human Rights in Iran that another round of unannounced secret group executions took place in Vakilabad Prison in Mashad on 23 and 24 May.

The Campaign was able to gather more information about the executions carried out in April and May, reported by the Campaign in the past few weeks. According to reports, 10 inmates were secretly hanged at Vakilabad Prison on 6 April. Also, on 13 April, 12 other prisoners were executed.

END_OF_DOCUMENT_TOKEN_TO_BE_REPLACED

In an interview with the International Campaign for Human Rights in Iran, activist Abdollah Momeni’s wife, Fatemeh Adinehvand, expressed concern about Momeni’s physical condition. “Mr. Momeni suffers from backache and has a heart condition. Since last week, he has been transferred to the prison infirmary twice. He received painkiller injections twice in order to relieve his back pain. He needs treatment outside the prison, but prison officials do not pay any attention to our requests for granting him furlough,” Adinehvand said.

Abdollah Momeni, a former spokesperson for Daftar-e Tahkim-e Vahdat (Office to Foster Unity) student organization, was arrested following the 2009 presidential election. He is currently serving his prison sentence of four years and 11 months inside Ward 350 of Evin Prison in Tehran.

END_OF_DOCUMENT_TOKEN_TO_BE_REPLACED

In an interview with the International Campaign for Human Rights in Iran, political activist Reza Alijani, talked about his former cellmate Hoda Saber and his death. “All the evidence shows that the rulers and security apparatus wanted him to die,” Alijani told the Campaign. “I see Hoda’s death as an invisible execution and a type of threat against others on hunger strike, that if they continue their strike, they will face death,” he said, referencing the negligence of prison authorities that resulted in Saber’s death.

Following his hunger strike and subsequent heart attack, journalist and Nationalist-Religious political activist Hoda Saber died on the morning of 11 June. Saber had been on a hunger strike since 2 June to protest events leading to the death of Haleh Sahabi. Starting on Friday morning, as Saber’s health deteriorated, he repeatedly asked prison authorities for help, but was transferred to Tehran’s Modarres Hospital hours later, where he died of a heart attack following his hunger strike.

END_OF_DOCUMENT_TOKEN_TO_BE_REPLACED 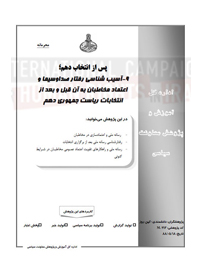 The International Campaign for Human Rights in Iran has obtained an exclusive copy of a confidential report prepared by a sub-division of the Islamic Republic of Iran Broadcasting (IRIB), in which the IRIB’s performance following the 2009 presidential election is seriously criticized and the network is held responsible for widespread protests arising from the announcement of the election results. The confidential report is dated 9 August 2009.
END_OF_DOCUMENT_TOKEN_TO_BE_REPLACED